The New York Jets have put a together a relatively quiet but productive offseason thus far considering their cap situation. Let’s quickly review what expectations should be for both their new additions and players they have decided to bring back.

1. Bruce Carter, ILB – Just signed today to roughly a veteran minimum deal, the former second round pick has been disappointing through his first few years in both Dallas and in Tampa Bay last year. However, Carter has the speed the Jets desperately need on both defense and special teams. You should think of Carter as a replacement for Jamari Lattimore, who will serve as the primary backup to both David Harris and Erin Henderson, play in certain defensive packages and be a core special teams player. If Carter can make a handful of of impact plays on both defense and special teams, while providing competent depth and showing some potential for the future, this low risk, cheap signing was more than worth it.

2. Steve McLendon, NT – We went more in-depth on McLendon here. He projects to be the Jets starting nose tackle and work in a platoon with second year player Deon Simon. The Jets are hoping he can be 75% of Damon Harrison for 1/8th of the guaranteed money. He will be surrounded by a deep, talented group of defensive ends which should help him. McLendon is the perfect example of a veteran, placeholder starter while the Jets hope to bridge the position to a homegrown player long term (Simon).

3. Jarvis Jenkins, DE – Jenkins is a 27 year old coming off his best season as a pro and is talented enough to be a competent starter. The Jets currently have him as their fourth defensive end (or potentially their third if Mo Wilkerson is traded). He is likely to take over a role occupied by Leger Douzable last season, which is a versatile backup on the Jets defensive line rotation. The amount he plays will depend on if Wilkerson is traded or if Sheldon Richardson is suspended.

4. Matt Forte, RB – The big name addition of the Jets offseason. We will have a full film breakdown of how Forte will fit into Chan Gailey’s offense and how much gas he has left in the tank this week but the Jets are banking on two productive seasons still being left in his legs. From a scheme fit, Forte is ideal because of his vision, versatility and ability to catch the football. Yes, he will be their “lead” back but he will also function as their third option in the passing game behind Brandon Marshall and Eric Decker. The Jets are likely hoping he can handle 12-15 carries per game, along with 5-7 targets. They are also hoping he can replicate the type of season Marshall had last year after many said the same things about him being in decline that they are saying about Forte this year.

5. Khiry Robinson, RB – You can find a little more on Robinson here. Pending recovery from his leg injury last November, the Jets will look to him for depth as an inside runner, a short yardage and red zone option. If Robinson can flash enough this season, the Jets could reinvest in him long term. Robinson has a similar skill set to the recently departed Chris Ivory but will not be tasked with the same workload due to the presence of Forte and Bilal Powell.

6. Daryl Morris, CB – A Darrin Walls replacement as a special teams gunner and depth cornerback. Morris is a player who brings top end speed for his position and should slot in as a capable backup, particularly if Dee Milliner continues to be unable to stay healthy and Dexter McDougle can’t distinguish himself in this defensive system. Out of the newly acquired outside free agents, Morris has the smallest chance of making the roster (although he has a reasonable chance overall).

7. Bilal Powell, RB – A favorite of the Jets coaching staff, who has the ability to be effective on all three downs. Powell will be interchangeable with Forte and likely finish much closer in overall touches to him than many are anticipating. The Jets will lean on him as a pass catching option, to work in sets alongside Forte with one of them split out and to carry the load for a few series at a time each half. The way the Jets used Powell in their five game winning streak last November and December is how they want to use him this season.

8. Erin Henderson, ILB – Outplayed Demario Davis last year and the Jets were able to get him for substantially cheaper than the Browns paid for Davis. Henderson will slot in alongside David Harris and should provide upgraded three down production from what the Jets have seen from Davis in recent years. The Jets took a flier on him last season and he rewarded them by showing enough to merit a second contract. This was quietly a very important signing for the Jets this offseason.

9. Kellen Davis, TE – Your only true “yuck” decision of the offseason so far. The Jets aren’t paying Davis much but he is a blocking tight end, who is not a good blocker along with being a gaping abyss of incompetence in the passing game. They need to do better at their Y tight end spot to complement Quincy Enunwa and Jace Amaro.

10. Kenbrell Thompkins, WR – Thompkins is likely to open the season as the third receiver behind Marshall and Decker, while Devin Smith finishes up rehabbing from his season ending injury last December. The Jets will utilize him as their outside “clear out” receiver who helps open space for Marshall and Decker underneath. Thompkins knows the system and is competent enough to handle his role well within the offense. (But I still can’t believe he dropped that pass against Buffalo last year). 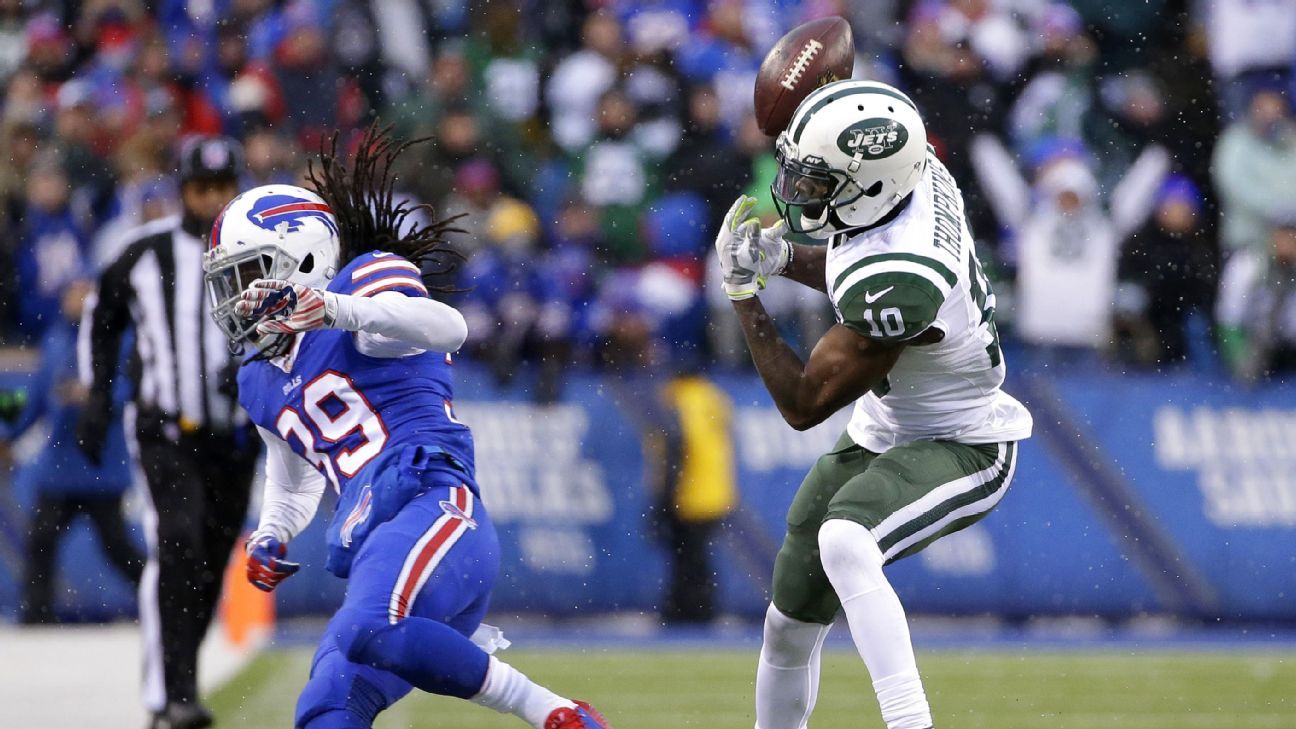 11. Zach Sudfeld, TE – The Jets are giving him another shot to stick as a special teamer and situational red zone threat in the passing game. Depending on how the draft goes, he will have an uphill battle to make the roster.

12. Next? – The Jets have recently met with Cowboys DE Jack Crawford, which continues their trend of shopping like a team who is either about to trade a defensive end or knows one of their defensive ends is going to be suspended.