With approximately $30-40 million in cap space, the New York Jets are pegged to be players when the new league year begins on March 3rd, 2013. Today, we look at free agent quarterbacks.

It is no secret the Jets botched Mark Sanchez’s career here. Anointing Sanchez the starter from day one, with no competition to speak of, was one of many missteps the they made. It appears that the Jets have learned from their mistakes, as general Manager John Idzik stated that the Jets will look at improving the Quarterback position this off-season. Geno Smith showed flashes that he could be the franchise QB, so we’ll find out soon enough if it’s lip service. Let’s look at the 5 free agent QBs that could be brought in as a backup and potential competition for the Jets rookie QB.

Analysis: Cassel stepped in for former first round draft choice Christian Ponder and led the Vikings to a 3-3 record. Cassel had 2 game winning drives and 2 fourth quarter comebacks as the Vikings signal caller. His best game came against the Philadelphia Eagles in Week 14, where he completed 74.29% of his passes and threw for 382 yards.

Likelihood: Cassel’s contract can be voided by the Vikings in February. As of now, let’s put the likelihood at a 6, but it could increase to a 7 if his contract is voided. Cassel would be a good fit in the West Coast offense, and he’s completed at least 58% of his passes for four straight seasons. He’d be a good mentor for Geno, and a guy that can step in if need be.

Analysis: Jets fans wanted Henne to be signed to push Mark Sanchez in 2012, but that never materialized. With the former Michigan Wolverine slated to become a free agent this off-season, Jets fans might finally get their wish. Henne had a string of 6 straight games this season where he completed at least 60% of his passes, and is only 28 years old. Chad has starting experience and has looked like Dan Marino a time or two against Rex’s defense.

Likelihood: Chad Henne is an unrestricted free agent, but GM Dave Caldwell has said that Henne could be resigned before hitting free agency. With the Jaguars holding a top 5 pick in the NFL Draft and in prime position to draft their franchise signal caller, lets put this as an 6.

Analysis: Hill did not play all of 2013, as Matt Stafford remained relatively healthy and played all 16 games. However, in 2012 Hill stepped in and completed 10-13 passes for 172 yards and 2 TDs in relief of Stafford. Hill has a career 61.9 completion percentage and a 2:1 TD to INT ratio.

Likelihood: Hill is an interesting case because it would seem that he would strictly be a veteran backup for the New York Jets. However, Hill does have part-time starting ability, is accurate with the football, and is able to fill in if needed. We’ll put this as a 5, because the Lions may resign Hill as Stafford’s backup. Analysis: Jackson is a career 17-17 starter and has played in the playoffs before. A career 59.6 completion percentage along with good mobility and underrated accuracy makes Jackson another intriguing possibility. He’s played minimally over the last two seasons, so he’s got less wear and tear than most 30 year old QBs.

Likelihood: Jets General Manager John Idzik was part of the Seattle front office that brought in Tarvaris Jackson to compete with Matt Flynn and Russell Wilson last year. Jackson showed good arm strength and accuracy in spot duty this year, so we’ll put this as a 7. 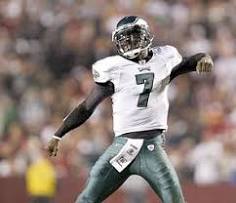 Analysis: Vick was named the Eagles starting QB for the Eagles, but lost his job to Nick Foles when he was injured in Week 5. Vick regained the job in Week 8 when Foles was hurt, but Foles regained his job after the game. Vick demonstrated the ability to still be a gamebreaker on offense, as he had an 8.2 yards per carry average. Vick, also, only threw 3 interceptions and had two fumbles lost as he admittedly put more effort on ball security. Vick has thrown for over 20,000 yards on his career and rushed for 5,500 yards. He has battled injuries as he hasn’t played 16 games in any of his seasons with the Eagles.

Likelihood Vick is an unrestricted free agent and has expressed a desire to start in the NFL. Vick had his best season as a professional QB under Jets offensive coordinator Marty Mornhinweg in 2010, as he completed 62.63% of his passes and threw for 318 yards with 21 TDs and 6 INTs. Vick is familiar with Morningwheg, 33 years old, and may be looking for one more shot at a starting job. Because of these things, the likelihood is at a 7.

If I Were A Betting Man…

Dalbin Osorio is a Case Planner for Graham-Windham, New York's oldest child welfare agency. He is, also, a student at the Silberman School of Social Work at Hunter College. Dalbin graduated from Monroe College with a degree in Business Administration. A 3 sport utility man in high school (think a mix of Jerome WIlliams, Brad Smith, and Jayson Nix), he joined TOJ in 2013. View all posts by Dalbin Osorio